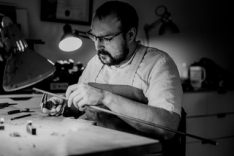 Born in Australia into an Irish family, Niall started playing the violin at the age of 5. He then became interested in making violins at the age of 16, going on to complete the violin making course in Newark, UK in 2010. Whilst in his final year at Newark, Niall worked part time in “Stringers of Edinburgh” London shop and it was here that he started working on bows.

After finishing at Newark, Niall joined Maison Bernard in Brussels serving an apprenticeship with Pierre Guillaume. Following that he spent nearly two years working with renowned bow maker Noel Burke. He opened a workshop in Kilkenny City, Ireland, and then in December 2019 he moved his workshop to Brussels, Belgium. His specialization is in new making in the French style. In 2018 Niall received a merit for craftsmanship in violin and cello from the Violin Society of America and in 2019 he received second place in the Concours International d’Archeterie. He takes a lot of inspiration from the work of Étienne Pajeot, Nicolas Maire and the great French makers of the early 19th Century.