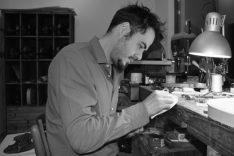 Gencer Cerit attended the Violin Making School at the State Conservatory of Anadolu University in Eskisehir, Turkey in 2005. He was also trained at the Ignacy Jan Paderewski Academy of Music in Poland with a scholarship in 2008. In the meantime, he assisted his teacher Marcin Krupa from Poznan Music Academy in his private workshop. Gencer Cerit graduated with a first degree from State Conservatory of Anadolu University Violin Making Department in 2009. In 2010, he moved to Germany to work with Jurgen Manthey for a year. In 2011 Gencer returned to the town of Eskishehir to build his own workshop and concentrate on his own making. Gencer regularly attends the Oberlin College Violin Makers Workshop and apart from Turkey, his instruments are played in England, Germany, Austria, Ireland, and Qatar.