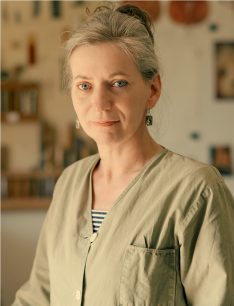 Born in Møn, Denmark in 1957, Andrea Frandsen studied violin making in Newark-on-Trent, England, where she graduated with distinction in 1985. In 1988, she established herself in Angers, France, together with Patrick Robin, creating the “Atelier Robin & Frandsen”. Since this time Andrea Frandsen has specialised in making fine violins, violas and cellos. In 2006 she created her own workshop in the Loire Valley close to Angers. Recognised in her field Andrea Frandsen gets invited as a member of the jury in major international violin making competitions.Her instruments are valued for their sound quality and their richness of timbre by soloists, orchestra musicians and chamber players throughout the world.Andrea Frandsen received the rank of Knight of the  National Order of Merit in 2008 and in 2013 the title of Maître Artisan d’Art. In 2016 she was nominated to the highest French distinction “Knight of the Legion of Honour”