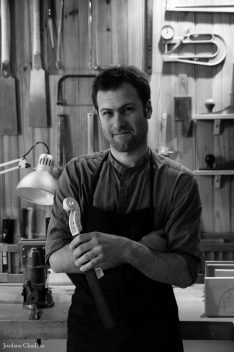 Originally from Quebec, Canada, Viateur Roy was encouraged by his mother to explore music at the Les Petits Chanteurs de Trois-Rivières School as well as aural skills (theory and musical practice, approach and listening to sound). Concurrently, he studied woodworking. To further his apprenticeship, he studied at L’École Nationale du Meuble of Victoriaville (Quebec, Canada), where he learned furniture and staircase making in solid wood, sculpture, marquetry and the basics of varnishing. He graduated with the Governor General of Canada Medal Award for best academic performance.

After successfully graduating from the National School of Lutherie at Mirecourt, France in 2009, he joined Patrick Robin’s workshop as his assistant where he has perfected his initial training and contributed to the manufacture of his instruments during the last nine years.”