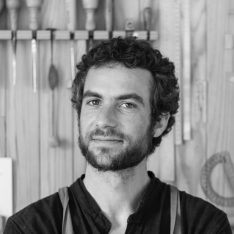 Antoine Cauche started studying violin making at the International School of Newark (GB) in 1998. He graduated with “Distinction” in 2001. Then he joined the workshop of Master violin maker Patrick Robin. He worked beside him for eight years and specialized in making fine violins, violas and cellos.

He finally set up his own workshop in 2008 in Angers. He concentrates on making quartet instruments, building up his experience by working with musicians, and exchanging with violin and bow maker colleagues.

His work has been acknowledged by several prizes in international competitions, such as :