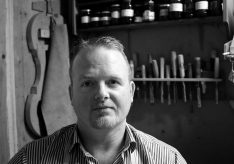 Patrick Barden initally trained to be a horticulturist at Greenmount college in Ireland. Upon graduating, Patrick worked in the family Nursery & Garden Centre in Cloughreagh Nurseries, for 10 years. It was during this period that Patrick developed a passion for instrument making and undertook night classes to make an acoustic guitar. Following the completion of the guitar, Patrick discovered that his enthusiasm for instrument making surpassed that of the Nursery and to this end, Barden enrolled in Newark School of Violin Making where he committed to completing the full three-year diploma in just two years. The devotion Patrick had for violin making made this commitment possible and in 2005, he passed the course with merit and also received a Bears Diploma.

The interest that developed for violins also inspired Patrick to look into violin bows. In 2006, Barden traveled to Salt Lake City, Utah to study bow making. He then returned home to Ireland in 2007 and established Patrick Joseph Barden Violins, where he tirelessly attempted to recreate the sound, varnish & style which can only be described as “Cremonese”. Although he has completed his academic studies in violin making over a decade ago, Patrick has not stopped researching, developing and experimenting with the methods of the Cremonese makers to attain a more authentic sound with every new instrument.