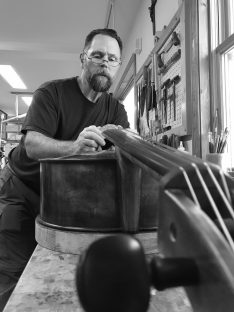 Lawrence Wilke’s interest in musical instruments began when he started playing cello at 8 years old. He began his studies with Marijane Carr Seigal of the Lyric Opera of Chicago, who also taught his uncle violin maker David Caron. He completed his cello studies from 1981-84 with Dr. William Klenz of SUNY Binghamton.

He began his apprenticeship as a violin maker in 1978 at the age of 16 with his uncle, master violin maker David Caron. During this time he also studied bow making and repair with Philip Krause. In 1986 he completed his studies when he went to work for Andrew Dipper in Taynton, England where he studied design and restoration. In 1988 he opened his own studio making violins, violas, but specializing in cello making.